So I DNF’d. I stopped at Tai O. I stopped because I knew that if I continued my body would be a mess. My mind would have been shot. And my confidence vanished. This was going to be a huge task. A mammoth task and one that I would have had to kill myself to complete it. Let me explain through the power of maths.

These are the races I have completed so far:

Runners World states that
“The 10-percent rule (10PR) is one of the most important and time-proven principles in running. It states that you should never increase your weekly mileage by more than 10 percent over the previous week.”

From MSIG to Lantau Vertical – This again is an increase of 32% in a week. Now the time is horrific but when we compare the vertical, MSIG was 567m, the Lantau 70 up to the point I stopped was 2010 metres. That is huge. Am I upset? No. I am so happy with the amount of progress that this shows.

I stayed overnight in Mui Wo at some friends and feel that this was a great move. The extra hours sleep and the relaxed vibe that Mui Wo emanates meant that I was super chilled by the time I got to the race line. I met with other team mates from the Trail Racing League Team; Etienne, Sherwin, Stuart, Joseph and Rishav. This was a big day for us. It was the first big race that we all were involved in. For some of us it was the first time we met. The camaraderie between us was awesome. We all had different plans and different times. So was going to be a long day on the trail. 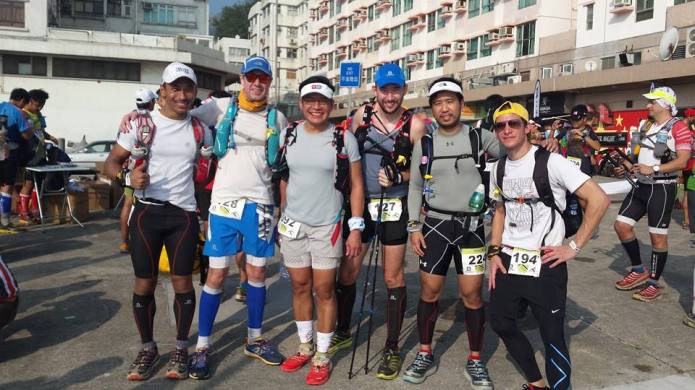 Two good friends were also running and so met up with Seth and Julia. They were super positive about the race and have been amazing to talk to move the last few months about my crazy ideas. 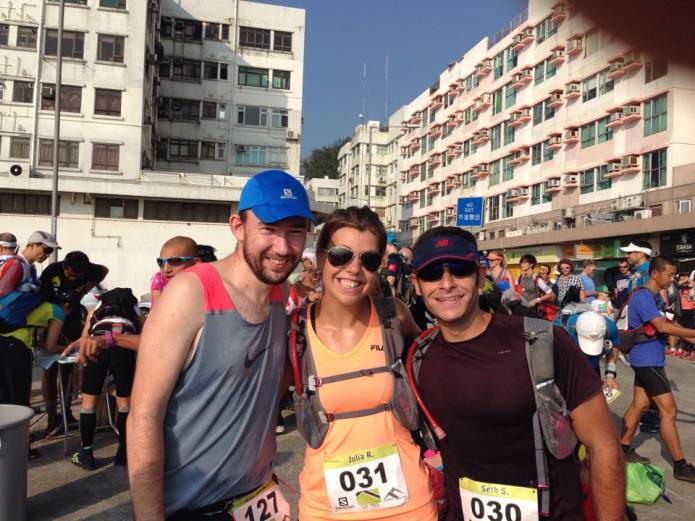 I also met with various other people that I have met through Hong Kong Trail group on FaceBook. One thing is for sure, the people who I’ve met are all awesome and have such amazing reasons why they run and how far they want to go.

Mui Wo to Ngong Ping

In my head this was going to be the toughest section. It has the two hills. Sunset and Lantau. Two mountains that I have met and disliked for so long. They are long ascents and difficult descents. The weather didn’t help. At one point my watch was telling me it was 33 degrees. I mean, it is November. 32. Seriously? My goal was to have at least 30 minutes at the checkpoint to recuperate before heading off quickly. I powered up at a steady pace up Sunset Peak, I didn’t want to kill myself as I knew there was still 60k after this section. 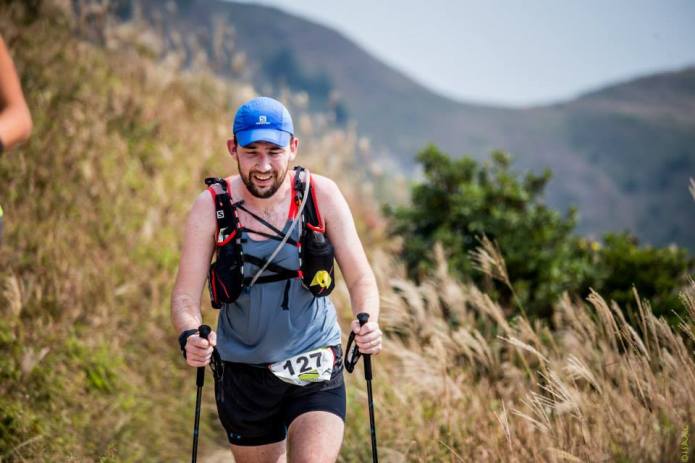 I was pleased with the power hike and the poles that I used. It felt good. I got up and over Sunset to Pak Kung Au in little over two hours. The last time I did this on a training hike it took 3hr45. This was huge for me. So I pushed on to Lantau Peak. Although I have done the route before, it was in reverse. I was quite comfortable albeit not very fast. I kept the momentum up and ended up getting to the top in about an hour and a half. The big issue was people ahead and just the heat. Once at the top it was cloudy, windy and much cooler. I took a minute to look around. I then realised that I had no TailWind left in the bladder and very little water left in my two front pocket bottles. I panicked, calmed down and then started the descent. This was hard work on the thighs and the poles came in handy. I got to Ngong Ping in 4hrs8mins. I had just under an hour spare. I stopped at the checkpoint refuelled, refilled, took a moment and then left.

The Wisdom Path was a nice long loop around the Buddha. He was everywhere as you rotated around him. Then it was a long down concrete road to the start of the trail again.At this point one of knees started hurting on the down hill concrete road. I spent about ten minutes hurling abuse at it. Telling it that it was not allowed to hurt yet and to stop being a b@4tard. Amazingly it stopped hurting. I trundled a long swapping sides of the road depending on where the shade was. Eventually reaching the Lantau Trail again, the climb started. Slowly and earnestly up and over some beautiful long grassed covered hills. At the top of one, I stopped, sat down and spent ten minutes crying my eyes out. I couldn’t tell you why. I couldn’t tell you what over. But the tears just rolled. They stopped. I stood up. And I continued. The trail became more technical and rocky. It was tough. The poles came in handy. The last two km or so was down a very steep concrete road/steps. This was hard. The legs were starting to hurt a little the further down I got. I arrive in Tai O with exactly an hour spare again. I had paced this really well and was very pleased. I came in to Tai O seeing Nick, a friend, and Martijn, someone who I have spoken to about running on the forum. I sat down, got my drop bag, had some crisps, pulled out the bottle of Coke. Then opened a little envelope where both Michceala and I had written little notes about how far I had gone and what I should do next. I was so happy at this point. I had pushed further than before and it felt good. I knew that this was going to be the hardest thing I had done and unto this point it was. I also remembered something someone told me, it is all about the baby steps. You can’t jump from 24 to 70 and it deserves the respect that I have for all the people that finished.

One of the things that I love about the trail running and ultra community in Hong Kong is the camaraderie amongst everyone. I decided that it was wrong for me to just go home. Some of the people I had met, whether online or in person, were pushing themselves to the absolute limited and I wanted to be at the end to see them. People like the trail racing league, Retha, who has been nothing but positive towards me and my crazy ideas, Dennis who I only met at the start of the race, and so many others. They all deserved the applause and the “Well Done.” Nick and I ended up leaving the Tai O checkpoint and headed back to the start/finish line. I am so glad I did. Watching the runners that started the race at the same time that I did, was the biggest motivation factor that I have had so far. Talking to people like Shane, Martijn and John (who did a 50k last sunday, 112k on Wednesday and then coming 4th at the L70), was great and they are all so positive about running and are always will to listen to inane and stupid questions. We waited for the team.

Stuart arrive an hour or so after I did. Stopping at CP3 with a knee injury.

Rishav came in 14:21. A brilliant run. He is an awesome athlete and such a nice guy too.

Etienne came in 14:26. Again a phenomenal run from a guy who I forced into signing up.

Joseph miss the final CP3 by 11 minutes. He did amazingly well considering the injury he is carrying.

Sherwin stopped at the same CP as me.

Seth and Julia finished early in the morning but within the time limit. They did amazingly and so proud to have them as friends.

All in all, a great day for many of us pushing ourselves beyond what we thought we could do. So proud to call so may of these people my friends.

Positive Lessons Learned
1. Nutrition feels like I have got it just right. The combination of UCAN and TailWind seems to work.

2. I can pace myself. I can stick to my plan and execute it. I wanted to have an hour at each checkpoint. I want more but after the first CP I wanted to ensure that I still had the same amount of time at each place. It felt good knowing that I hadn’t actually lost any time during each sections.

3. I can do this. Simple as that. I have no negative thoughts about yesterday at all. In fact, I enjoyed it. I will be back and I will compete in next years Lantau 70. And I will finish.

Babysteps, every day is a leg day, featured, hard work, hong kong, if i can do it you can, inspiration, lantau, Lantau Base Camp, proud, really proud, Salomon Lantau 70, suunto, thetrailto100miles, trail running, ultra

The Heat is On: May

“Failures, repeated failures, are finger posts on the road to achievement. One fails forward toward success.” C. S. Lewis —- This month I have been mostly listening to Island by Klangstof […]
The Heat is On: May

I realised today that I haven’t really been keeping up with the blog at all. So lets play catch up. This week I have been mostly listening to Flume. So let’s […]
98 days since and 98 days till

I posted this video but I thought I would repost […]
“Not all those who wander are lost.” – 23rd November – 29th November

Happiness is not something ready made. It comes from your own actions. – Dalai Lama Post Lantau 70 has been a week of smiles and being thankful. There was much […]
2nd November – 22rd November

Three weeks since the STY and only now can I […]
Rest, Recover, Review; 28th September -25th October

The only time you should look back, is to see […]
21nd September – 27th September: Ultra Trail Mount Fuji STY
%d bloggers like this: